Writing a book is an interesting endeavor. What and how you write shifts with your mood, and similarly, how you view what you’ve written changes in the same way. There are times you think it’s brilliant and times you’re positive it’s as dull as dishwater. The truth is always in between the two extremes.

Having begun to inject more action into the book, I’ve realized I’m boring myself with this mostly character study. Therefore, I need to go back and inject threads of action into the story and add more elements of suspense. In other books I’ve planned out action sequences well in advance, sometimes basing them on actual events. But I’ve also written them spontaneously, allowing the sequences to play out in my mind like a slow-motion video (like the chase scene through Casablanca I just wrote). In Jeanne Dark, I’d need to do a combination, looking for places where I can spice things up. But doing so means making the book longer unless I cut some stuff out. 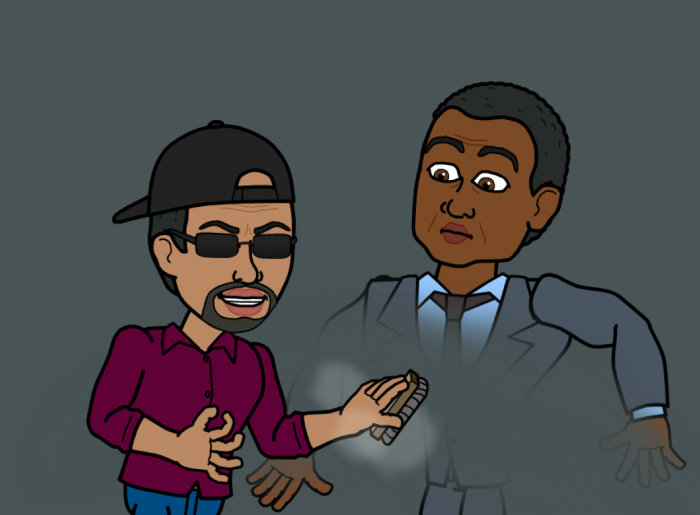 Bill threatens to erase Foster from the book.

Well, probably nothing as extreme as killing off a major character (yet), but certainly some elements get removed. I tend to have romantic story lines in my book. Maybe that needs to be sacrificed here, and my two characters just continue to rub each other the wrong (and less of the right) way. Not sure. I’m wondering if people care about romance. In my most recent book, I think the romance became the actual biggest mystery in the book. Is that one mystery too many? Is complexity better than simplicity? Dunno.

Personally, I like the fact that my characters 1) adore each other, 2) absolutely refuse to admit it, least of all to themselves, and 3) get on each others’ nerves. What to do, what to do?

Foster intervenes with Dark’s smoking habit. (It’s in the book.)

I guess I’ll sleep on it. I’m sure I’ll have done a few 180s by the next time I resume writing.