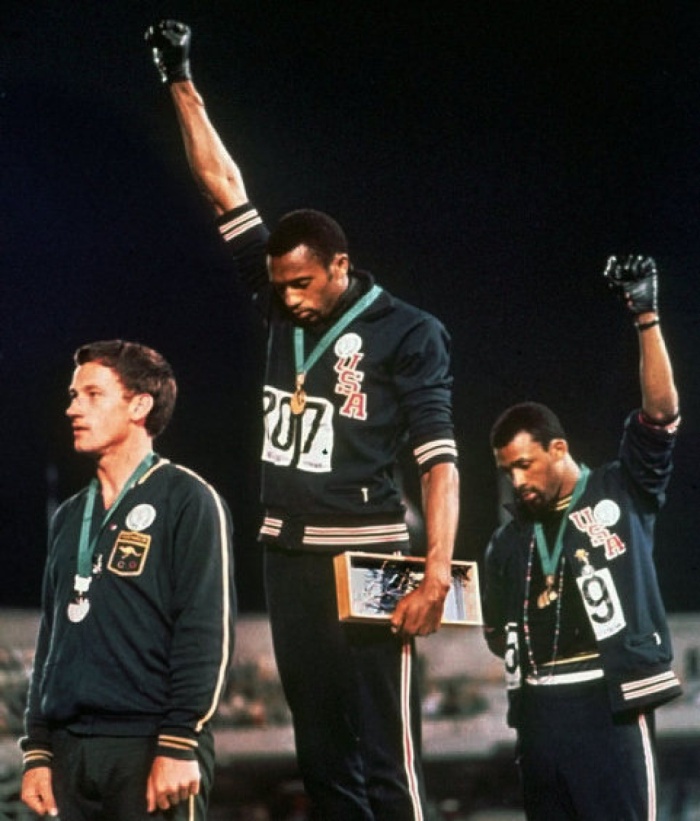 In this Oct. 16, 1968, file photo, United States athletes Tommie Smith, center, and John Carlos, right, extend their gloved fists skyward during the playing of the “Star-Spangled Banner” after Smith received the gold and Carlos the bronze for the 200-meter run at the Summer Olympic Games in Mexico City, Carlos and Smith raised their black-gloved fists on the medals stand as a symbol of protest. Australia’s silver medalist Peter Norman is at left. (AP Photo/file – John Dominis, photographer)

Much is being written this week about the protest of a young, biracial athlete’s refusal to stand for the U.S. national anthem. For an old-timer like me, it is noteworthy only in that his protest echoes similar protests made nearly 50 years ago, not to mention my own protests in 1970, spurred on by Tommie Smith and John Carlos’s protest two years earlier. Such protests have nothing to do with disloyalty to the U.S. I stopped standing for the National Anthem and pledge of Allegiance at age 12. I come from a military family, growing up in my grandfather’s house, himself a retired Lt. Colonel and veteran of WW II and the Korean War. I’ve held clearances by any number of U.S. government organizations and my loyalty to and pride in America is unshakable.

But pride doesn’t imply perfection. Loyalty isn’t a pledge to remain silent. Indeed, if you believe in the First Amendment, the foundation of our society’s public life, one could say you are obligated to speak out when things go astray. The fact that Colin Kaepernick feels forced to make the same protest I and others did in 1970, then at the very least we must acknowledge that something is broken. Women aren’t marching in the streets for the Equal Rights Amendment any more, but equal pay still hasn’t happened and we could very well see that battle renewed. Either society improves, or young people with a voice have the right (if not the obligation) to stand up (or sit down) for change.

For those who don’t know the backstory of the photo above, here’s a brief, taken from Wikipedia:

The 1968 Olympics Black Power salute was a political demonstration conducted by African-American athletes Tommie Smith and John Carlos during their medal ceremony at the 1968 Summer Olympics in the Olympic Stadium in Mexico City. After having won gold and bronze medals, respectively, in the 200 meter running event, they turned on the podium to face their flags, and to hear the American national anthem, “The Star-Spangled Banner“. Each athlete raised a black-gloved fist, and kept them raised until the anthem had finished. In addition, Smith, Carlos, and Australian silver medalist Peter Norman all wore human rights badges on their jackets. In his autobiography, Silent Gesture, Smith stated that the gesture was not a “Black Power” salute, but a “human rights salute”. The event is regarded as one of the most overtly political statements in the history of the modern Olympic Games.[1]

There are three tidbits that aren’t obvious from this shot. First, IOC head and fearless Nazi Sympathizer, Avery Brundage, who’d supported 1936 Germany’s use of the Nazi salute, threatened to ban the entire US track team from the Olympic Village unless the U.S. took action, which they initially refused. It wasn’t the U.S. committee that got Smith and Carlos expelled from the Games, it was Nazi-loving, hypocrite Brundage. Second, the man in the left of the frame, Peter Norman, was arguably punished for his support as well, as Australia decided not to send sprinters to the 1972 Olympics, which many believe was done to keep Norman from competing. It was Norman who’d suggested that Smith and Carlos share a pair of gloves after Carlos forgot his and left his pair in the Village. Third, although the crowd booed, and journalists like Shit-for-brains Brent Musburger vilified the pair (calling them “black skinned stormtroopers”) we Negroes were thrilled. They weren’t saying “Black is Better.” They didn’t mean “Kill Whitey.” They simply meant, “We are here, we stand tall, and we deserve to be treated with respect.”

There are those who’ll argue that message should be extended to young, black Americans who kill other blacks. I say, “Hell yes.” I’ve lost 2 cousins to senseless murder, one over a damned Chrysler, of all things. Can you imagine dying trying to protect your piece of shit Chrysler? But I would also argue that self-hatred is symptomatic, as is Kaepernick’s genuine 1973 afro or his 70s-era pig socks. Young black men are seen by a few bad cops and more bad, young black men as expendable. I’ve read the 1865 Reconstruction files from post-Civil War police reports, and trust me, they read the same way. Some cops abuse young blacks. The hatred and fear is returned. Poor areas are deadly, just as they are in Brazil, Africa, Bermondsey in London, the Middle East, Chicago, and anywhere else people have more access to violence than hope. Blaming the cops won’t help, nor will hating the young black men who get shot or do the shooting. The only thing that will help is if those who see something, say something.

So, notice, young urban black with the gun in his belt, Colin K is talking to you, too. If you want the cops to stop shooting unarmed black men, you can help by stop making cops afraid of young black men. He’s talking to you too, officer. He isn’t saying you’re a bad cop or that police should be feared; however, he IS saying your loyalties should be to society and not your police brethren. If a cop is bad or does the wrong thing, TURN HIS ASS IN. You uplift your profession in doing so, and help society in the process.

I see a young man taking a risk in the hopes that someone will notice and say, “Something’s broken, and the status quo won’t fix it.” I don’t see his saying I hate America any more than Tommie Smith and John Carlos did. They were all saying that they hate disparity, unfairness, wantonness. If the only weapons they have to win the war against that tide is to stand, or sit, or shout, then power to them. If a knee or a glove is a threat to society, then there’s something really wrong with society. I’ll stand up for the flag when the flag stands up for me. And in truth, for a while, it did. By the time Obama became the Prez, I’d begun to stand. I sit now, however, seeing the hatred his reaching the pinnacle has stirred up. Those under society’s thumb do themselves a disservice in staying silent and pretending that everything is okay. Artists do society a greater disservice in not noticing when they do.

The photo is an ordinary shot, by most standards, but ordinary often becomes iconic. The photographer’s job is to notice the event as it happens, and capture it in a way that the world will remember. By any measure, John Dominis did that, and we will never forget Tommie or John, not because they stood tall, but because John Dominis made the world see and remember.

That, my friends, is what photography is for. 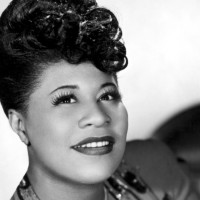 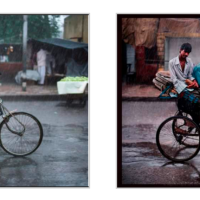 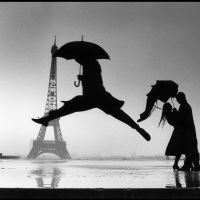